The Parable of the Rich Fool (A warning against all covetousness) 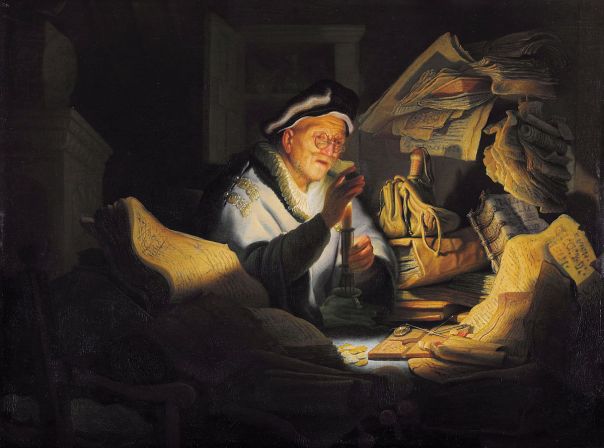 “Rembrandt – The Parable of the Rich Fool” by Rembrandt – http://www.uni-leipzig.de : Home : Info : Pic. Licensed under Public Domain via Wikimedia Commons

13 Someone in the crowd said to Jesus, “Teacher, tell my brother to divide the inheritance with me.” 14 But he said to him, “Man, who made me a judge or arbitrator over you?” 15 And he said to them, “Take care, and be on your guard against all covetousness, for one’s life does not consist in the abundance of his possessions.” 16 And he told them a parable, saying, “The land of a rich man produced plentifully, 17 and he thought to himself, ‘What shall I do, for I have nowhere to store my crops?’ 18 And he said, ‘I will do this: I will tear down my barns and build larger ones, and there I will store all my grain and my goods. 19 And I will say to my soul, “Soul, you have ample goods laid up for many years; relax, eat, drink, be merry.”’ 20 But God said to him, ‘Fool! This night your soul is required of you, and the things you have prepared, whose will they be?’ 21 So is the one who lays up treasure for himself and is not rich toward God.” (Luke 12:13-21)

A sin which many people celebrate openly is the sin of covetousness. You see them in magazines bragging about how many cars and mansions they own. On TV you see celebrities who constantly show off their great wealth, trophy wives (and husbands), their clothes and what not. They try to mask off their pride with the label of being achievers. No problem with mere achievements but the point remains, life doesn’t consist in abundance of possessions. Indeed, where will one take so much wealth if one has to die. Won’t it be as nothing to you once you’re gone away from this world? No man nor woman can take even a pinch of salt once his or her time is up on earth.

Jesus didn’t want to be judge to the man about the division of the inheritance. He knew the heart of all people and knew what mattered most. Notice, he didn’t tell that man to not go for his share of inheritance but rather tried to correct his perspective on gaining possessions. Does the mindset towards wealth or pleasant things matter? Yes, it does affect your moral judgement for better or for worse. Because there are lots of people who have plotted to kill their own parents for mere ounces of gold and silver. For them money was more important than family. Obviously, such killers will have to face judgement for their sins be it by the police or the Day of Judgement by God. You have got to think more about eternity rather that your time in this world which is much shorter than that in eternity.

The Lord Jesus made it clear by the Parable of the Rich Fool which he spoke about, that one’s life does not consist in the abundance of his possessions. The rich mentioned in that Parable only sought abundance of grains and goods. He only wished to have a lavish lifestyle for many years to come. Yet in all this he was not rich towards God. He didn’t care for the poor and needy. He didn’t bother about putting some money for maintaining the priests of the Lord God. In all this, that man didn’t consider about when he would die. And suddenly the voice of God rebuked him that since the rich man was going to die that very night, the wealth that he acquired whose it would be? That man’s story ended in tragedy as this parable doesn’t mention about him asking God for a chance to repent. Don’t let this be your story nor your fate. Repent of all covetousness when you have the time. Don’t waste your life in the pursuit of things that you forget about God.

Posted on March 17, 2015, in Discernment and tagged covetousness, Last Judgment, Parables of Jesus, The Parable of the Rich Fool. Bookmark the permalink. Leave a comment.