God gave us material things to bless others 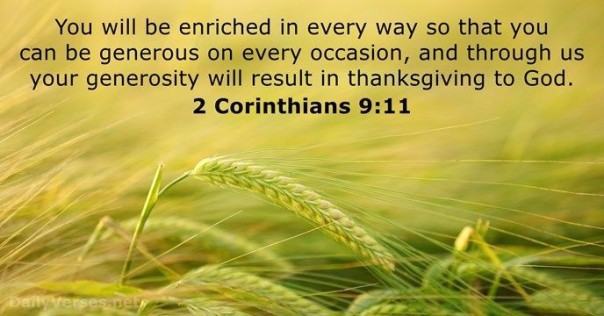 If you keep asking for God’s blessings for yourself but are only interested to use it for yourself and your families then don’t even call yourself a believer of Jesus Christ. Such a behavior is not fitting the attributes of a true Christian.

Some people are so vile or maybe ignorant that they say ‘God bless me with ‘just’ enough for me and my family’. Because somehow they feel that they can then excuse themselves when others are in need saying that they don’t have anything to spare.

Perhaps they have never heard about Jesus speaking about the Good Samaritan who helped the man who was robbed and left for half dead. Or perhaps they they know but don’t feel it applies to them. I have news for you – being generous to others who are in need is not optional for those who claim to profess the Christ faith! And this is confirmed by the Holy Scriptures as given in Matthew 25:31-46 below:

31 “But when the Son of Man comes in his glory, and all the angels with him, then he will sit upon his glorious throne. 32 All the nations will be gathered in his presence, and he will separate the people as a shepherd separates the sheep from the goats. 33 He will place the sheep at his right hand and the goats at his left.

Live again for the Lord

Quick Reminder: Many are called but few are chosen

Do not listen to foolish advice

Do not listen to foolish advice,
Lest you end up paying the price.
For many have desired sinful pleasure,
Only to lose their life’s treasure.

Wisdom speaks clearly and loud,
Learn from her and be not proud.
Hearing wise words is a good tact,
When followed with the right act.

God desires to see wisdom in all believers,
In that they be prudent in the age of deceivers.
Pray to the Lord for ears that don’t tingle,
So that with false teachers you don’t mingle.

The eyes of the Lord are over the righteous

Refrain from taking the Mark of the Beast

Refrain from taking the Mark of the Beast,
For its damnation by the Devil’s yeast.
Sorrow, pain and eternal regret,
If God’s command one does forget.

Trust not worthless idols and images,
Be not part of the world and savages.
Heed what Christ has commanded,
Faithfulness to the end is demanded.

Even if the forces of darkness seem to win,
Take not the vile mark and thus sin.
Trust in God even if faced with death,
Hold on to Jesus of Nazareth.

Though millions may take the Beast’s Mark,
The Gospel if you believe is enough life spark.
Don’t be fearful of sickness and pestilence,
In those times; focus on God’s ordinance.

By the Holy Spirit you live,
And by Christ you forgive.
Let your prayer then remain,
That Jesus Christ come again.

Praise be to the Lord God who provides the seed of His word and the faith to work on it. By intercession of Christ Jesus our Saviour we keep ever growing in spirit and knowledge. O Holy Spirit lead us into all truth and keep us away from lethargy and false counsel.

We are called to grow in the Lord God. There are no exceptions to this. No need to worry if others don’t grow as much as you do.

But grow in the grace and knowledge of our Lord and Savior Jesus Christ. To him be the glory both now and to the day of eternity. Amen. (2 Peter 3:18)

Be like Samuel the Prophet who didn’t ignore the Word of God but kept it in all earnest. Samuel’s duty was to grow in the knowledge that God gave him. He didn’t focus on those who didn’t but kept to his task. (Prophet Samuel later in life went on to annoint David as the king of Israel – refer to 1 Samuel 16:1-13 for this). He never gave up his spiritual growth though his mentor Eli’s sons grew in wickedness (Click here if you want to know a lesson about Eli).

And Samuel grew, and the Lord was with him and let none of his words fall to the ground. And all Israel from Dan to Beersheba knew that Samuel was established as a prophet of the Lord.(1 Samuel 3:19-20)

You might not know the future but there may be people who one day will need your help. It might be your own family members who might need counsel on life changing decisions. You may have to cast out evil spirits from the possessed people who turn to you. Or you just have to be a good Samaritan to those in danger. But God knows best what good you are to do. What matters then is whether you decide to grow in the knowledge and grace of Jesus Christ. Because that’s the very thing which will help you with doing all the good works that God has set forth before you. By this you can give glory to God and be a good neighbor to those in need.

Suppose you feel upset that others are not growing in the Lord God, then do not despair. You can intercede for them. And wherever possible even directly help them grow. But never be too proud of your growth and so end up displeasing God. Also take care not to slow down on your growth in Spirit. Because neither will it help others grow nor will it give glory to God.

All praise to the Lord Jesus Christ. Lead us O Lord God, by your Holy Spirit into self control in all things we think or do. Amen.

Right at the beginning want to say to any dog owner reading that this; please don’t get carried away by the experiments mentioned below. Simply treat your dog(s) normally.

Now it’s a very nice experience to look after little pets who are the creation of God. Just to let you know, in the scientific world and especially those concerned with psychology, Pavlov’s experiment’s with dogs are quite a nostalgic thing.It rings a bell for them.

Now there was this Nobel Prize winner in Physiology or Medicine called Ivan Pavlov. This man who is also a Russian started his experiments on dogs, about Classical Conditioning which are now called as Pavlov’s experiments. In such cases the subject dogs were given food bits after hearing a bell sound. Eventually the dog’s mind’s got accustomed to receiving such ‘rewards’ after the bell sounds that they would automatically salivate in anticipation of the food they’d be receiving very shortly. Those with dog’s at their homes might possibly observe that such loyal creatures do salivate at times of eating food etc. 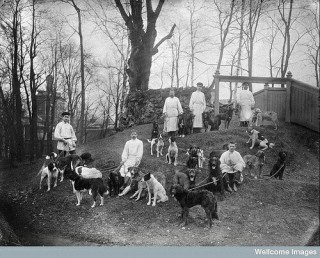 Pavlov’s dogs along with their handlers

Pavlov’s findings are used not only by those wearing lab coats but other’s too. Certain companies have marketing strategies which still use Pavlov’s theories about rewards for classical conditioning to outsell other competitor’s who have similar products. Basically they show some cheerful looking young man or woman who seems to derive happiness once he or she consumes so and so product. In reality the actor’s in such videos or poster’s are smiling only because they are being paid for such smiles as part of their contract. But in general, people still fall for this trick and buy products based on such advertising despite having availability of other such products which use lesser or no exaggeration in their sales. I’d suggest that one checks the actual product’s reviews instead of going solely by the advertising alone.

Now with regards to the topic of eating and drinking, we are not to get trapped into this food rewards program. Pavlov might have had his own agenda for his famous experiments but he surely didn’t intend for humans to see food as rewards for themselves.

However there are certain people who reward themselves with food. They set benchmarks of achievements and upon achieving them they gorge themselves on a huge amount of food. Nothing wrong with celebrating success. But the way you celebrate is the real issue.

Let me give you an example. There are people who after a hard day’s work reach home and eat as many donuts they can after dinner. They do this as an emotional pat on the back for themselves. It feels so nice to them. Yet this slowly over a period of time makes them unwittingly gluttonous. Now it reaches a stage where subsequent weight gain is visible to all. Such persons don’t stop but continue to reward themselves with more food. Some these don’t get into all such overzealous eating all by themselves, they do it in a group.

Now what does the Bible teach us about gluttony. Here’s a few of them:

Be not among drunkards or among gluttonous eaters of meat, for the drunkard and the glutton will come to poverty, and slumber will clothe them with rags. (Proverbs 23:20-21)

If you have found honey, eat only enough for you, lest you have your fill of it and vomit it. (Proverbs 25:16)

For many, of whom I have often told you and now tell you even with tears, walk as enemies of the cross of Christ. Their end is destruction, their god is their belly, and they glory in their shame, with minds set on earthly things. (Philippians 3:18-19)

Now one may feel that one’s got a right to spend as they wish for their food especially since they don’t steal for it. I have no objections to that but I still have to say that not everything that’s lawful will help.

At times you might need to eat a lot but ideally this should be for strength and not for the wrong reasons.

Happy are you, O land, when your king is the son of the nobility, and your princes feast at the proper time, for strength, and not for drunkenness! (Ecclesiastes 10:17)

Behold, this was the guilt of your sister Sodom: she and her daughters had pride, excess of food, and prosperous ease, but did not aid the poor and needy. They were haughty and did an abomination before me. So I removed them, when I saw it. (Ezekiel 16:49-50)

Keep yourselves away from emotional eating. Surrender all your cares and worries unto the Lord Jesus. Don’t depend on food rewards but eat rightly. Because life is more than food and drink.

But he answered, “It is written, “‘Man shall not live by bread alone, but by every word that comes from the mouth of God.’” (Matthew 4:4)

For the kingdom of God is not a matter of eating and drinking but of righteousness and peace and joy in the Holy Spirit. (Romans 14:17)