Rise up for the Lord

Don’t stay down in life,
Nor let laziness get rife.
Like Gideon get all ready,
On God’s Word be steady.

Win that victory first in your heart,
So that towards God’s plan you start.
Don’t fear the future, present nor the past,
But all this unto the Lord you cast.

Be willing to conquer all strongholds,
As God’s will for your life unfolds.
Rescue those weak in faith,
From each insidious scathe.

Rise against sin by true repentance,
Let faith be filled in each sentence.
Be of good cheer and good hope,
And with Christ all challenges cope.

Three ways to be shrewd when interacting with believers in Christ

For the sons of this world are more shrewd in dealing with their own generation than the sons of light. (Luke 16:8)

In the parable of the Dishonest Manager/Steward (read John 16:1-9) Jesus mentions about a crooked manager used his shrewdness to escape from an audit by his boss who suspected him of wrong doing and also gain favour with those who were in debt from the place he worked in. The point that Jesus makes is that though wicked people use their cunning to escape an earthly punishment, they will still not escape eternal damnation and will also be accompanied by their partners in crime when being tormented.

Now that we know the end of the wicked, its time we also take one thing into consideration; the way the sons of light deal with each other, shrewdly. In context of the wicked being shrewd with each other we can expect some twisted and corrupted dealings. While for the sons of light who I can say are the children of God by faith in Jesus Christ, the context is how wisely they deal with each other while being holy and just and loving to each other. This does not mean we cheat or trick each other, for if we do then can such people be truly called the children of God?

Let me make it real to you. It’s truly possible to be shrewd when dealing with other Christians and I will show you how. But first let’s get a clear meaning of the word shrewd.

Shrewd : having or showing an ability to understand things and to make good judgments : mentally sharp or clever (Source: Merriam-Webster’s Learner’s Dictionary)

Since we have realized what the word ‘shrewd’ means let me give you three ways you can be shrewd in your interactions with other Christians. Here we go:

Let the word of Christ dwell in you richly, teaching and admonishing one another in all wisdom, singing psalms and hymns and spiritual songs, with thankfulness in your hearts to God. (Colossians 3:16)

What then shall we say, brothers? When you come together, everyone has a psalm or a teaching, a revelation, a tongue, or an interpretation. All of these must be done to build up the church. (1 Corinthians 14:26)

Don’t expect the world to tell your fellow brother or sister in Christ to follow the Gospel. The world well, is the world. It’s hidden master is the Devil. Would the Fallen One really encourage those under his grip to tell the people of the Lord God to follow the Gospel? Definitely no! At most the hellish serpent instead would let the world teach Christian as many counterfeit Gospels as they can. Oh, wait that’s already happening.

So it’s better that you who believe in Christ, follow what’s mentioned in the Bible and encourage each other who are in Christ to follow the Gospel of Jesus Christ. You can speak, you can sign, even in psalms and hymns to encourage the people of God to cling to the Lord God. Nowadays it’s possible to even send Bible verses, Christian praise and worship songs and videos and images which contain biblical messages to others via various social media. You can thank the ushers at church, say a kind word to your preacher and say thank you to those who go overseas to preach the Gospel. A small word of encouragement may mean a lot to them especially those who are taken for granted. 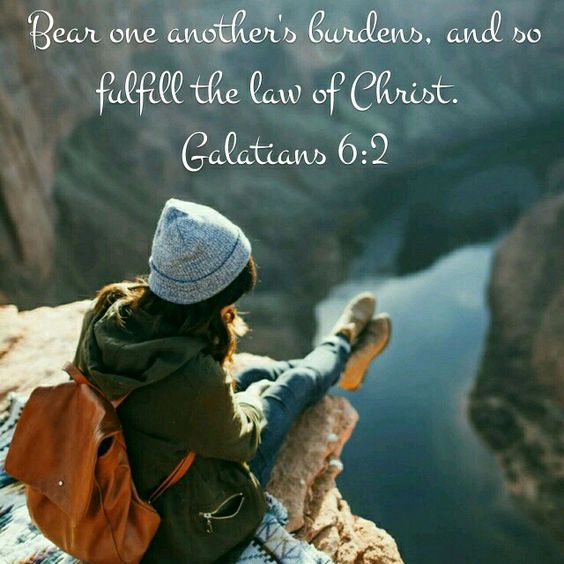 2) You can warn others tactfully and save them from trouble

My brothers, if anyone among you wanders from the truth and someone brings him back, let him know that whoever brings back a sinner from his wandering will save his soul from death and will cover a multitude of sins. (James 5:19-20)

There are some Christians who are being tempted all the time and this is a tough burden to carry. You can’t expect the world to help them. That’s where you intervene and help all those in Christ from falling away from the path of righteousness.

Suppose you observe that a brother in Christ is in danger of being a drug addict, you can tell him to stop his habit. However, some people are very hostile to direct confrontation. So if you don’t want to be direct, you can given him examples of those who took to drugs and are now in poverty and have ruined careers and how now they are far from the Gospel. Perhaps, that brother might repent and turn to the Lord Jesus again.

Maybe you know of a woman who attends your church and is known to attend the worship of false gods, you can act on that too. Pray about it first to the Lord God for her salvation. If you can then directly speak up if possible. Now at some local churches they are too finicky about a man speaking to a woman and vice versa. So in such a case, one can request a woman who is strong in the Lord to approach the woman who worships false gods and preach the Gospel to her. Or at best, get the preacher or the pastor to do that. As usual do your due diligence.

3) You can refrain from blindly believing things

Beloved, do not believe every spirit, but test the spirits to see whether they are from God, for many false prophets have gone out into the world. By this you know the Spirit of God: every spirit that confesses that Jesus Christ has come in the flesh is from God, and every spirit that does not confess Jesus is not from God. This is the spirit of the antichrist, which you heard was coming and now is in the world already. (1 John 4:1-3)

Beloved, although I was very eager to write to you about our common salvation, I found it necessary to write appealing to you to contend for the faith that was once for all delivered to the saints. For certain people have crept in unnoticed who long ago were designated for this condemnation, ungodly people, who pervert the grace of our God into sensuality and deny our only Master and Lord, Jesus Christ. (Jude 1:3-4)

There is a serious need that while you help Christians to be loyal to the Lord God, you yourself don’t fall off the way of life. And for this reason do not blindly believe things that even other Christians tell you. Everything they say must stand the test of the Holy Scriptures. Always remember that no Christian leader is above the authority of the Bible. It doesn’t even matter if they tell you how sincere they are. If what they say contradicts the Bible, you better not follow what they say. Instead you follow what the Lord God says in the Bible.