Control your tongue when you are bitter 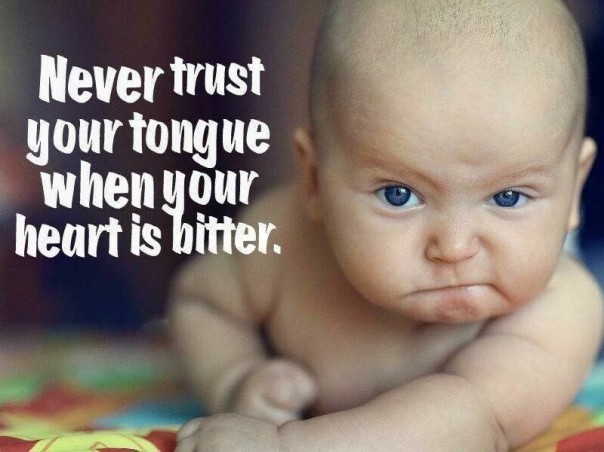 “A gentle tongue is a tree of life, but perverseness in it breaks the spirit.” (Proverbs 15:4)

“Death and life are in the power of the tongue, and those who love it will eat its fruits.” (Proverbs 18:21)

“Whoever desires to love life and see good days, let him keep his tongue from evil and his lips from speaking deceit.” (1 Peter 3:10)

“If anyone thinks he is religious and does not bridle his tongue but deceives his heart, this person’s religion is worthless.” (James 1:26)

For some to control one’s tongue when its pleasant all around is difficult. How much more difficult for them to keep it in check when their heart is filled with bitterness? As for the rest its still an achievement to control themselves when there is bitterness in their life.

However if we remember the words of the Bible then we should know the consequences of speaking the wrong things, the bad things and evil things. Let me make it real to you; there are considerable divorce cases going on which could have been prevented if either or both of the spouses would have not insulted each other by a very wide degree. Or there are people or children who keep running away from their parents because the parents love to speak evil words to them. Now, I don’t justify divorce nor unnecessary running away on account of such things but yes I do strongly recommend control of one’s tongue to prevent any further damage to oneself and others.

Some may say they didn’t actually mean it when they said things that were hurtful to others. That’s exactly my point. Don’t say things that you don’t mean to say in the first place and don’t make any of your emotions whether happiness or bitterness as your excuse for the same!

Make a decision this day to use your tongue more wisely. The benefits are many; better relationships, peace in your dealings with others, living clean and giving glory to God all in all. It’s up to you to control your speech but do pray to the Lord God for his healing and deliverance in this area.

O Lord God I ask through your Son Jesus Christ that I be holy as you are holy. Make my tongue an instrument of peace. Help me to speak words that are wise and life giving. Empower me by your Holy Spirit to not have be deceived by emotions whether they are mine or of others. In the name of Jesus, I cast out the spirit of discord and perversion of tongue from my life and totally reject the influence of all that is earthly, sensual and demonic. I pray that I be victorious in my life on the inside and the outside so that God be glorified all in all. Amen.

Quick reminder : Speak wisely as God knows what you say 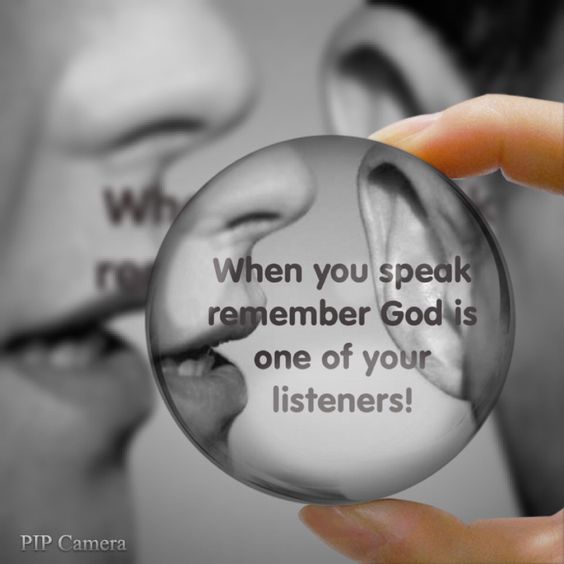 “And you, Solomon my son, know the God of your father and serve him with a whole heart and with a willing mind, for the LORD searches all hearts and understands every plan and thought. If you seek him, he will be found by you, but if you forsake him, he will cast you off forever. (1 Chronicles 28:9)

“I the LORD search the heart and test the mind, to give every man according to his ways, according to the fruit of his deeds.” (Jeremiah 17:10)

“Behold, I am coming soon, bringing my recompense with me, to repay each one for what he has done. (Revelation 22:12)

{A poem on those who mock religion using foul and ungodly language while totally ignoring the Biblical concept of religion, the Christian religion founded by Jesus Christ. May God open the eyes of those who attend church but attack religion. May others who are true to the faith, continue to be working for God instead of hating religion.}

Call it a fad or a lack of vision,
Some people say they hate religion.
As if it’s a serpent red or blue,
they label it as very untrue.

Religion is not legalism by any fact,
but they think that both are same, exact!
Maybe their dictionary doesn’t say belief,
so of religion they think it means thief.

Unwitting they fight what is God ordained,
using perverse words all fickle and unrestrained.
Instead of tackling the hypocrites by name,
their own actions make them the same.

Vainly they say religion preaches to harm and hate,
even when the Bible encourages to love the reprobate.
And yet they claim Jesus is their Lord dear,
when they have only have spread foolish fear!

If anyone thinks he is religious and does not bridle his tongue but deceives his heart, this person’s religion is worthless. Religion that is pure and undefiled before God, the Father, is this: to visit orphans and widows in their affliction, and to keep oneself unstained from the world.”

having the appearance of godliness, but denying its power. Avoid such people.

God gave us mouths that close 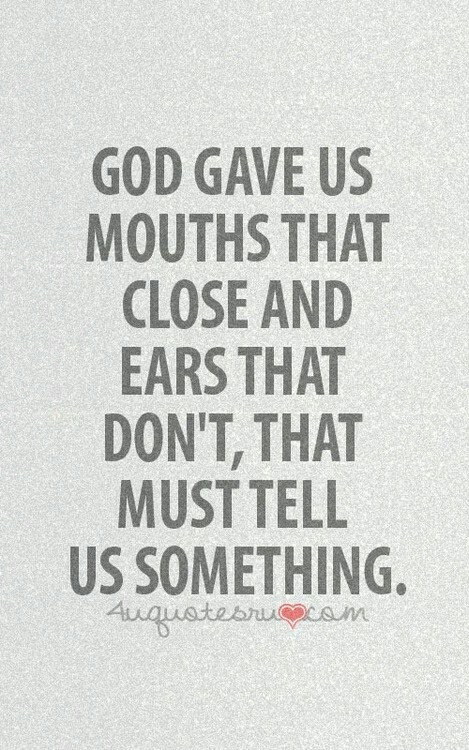 He who has an ear, let him hear what the Spirit says to the churches. To the one who conquers I will grant to eat of the tree of life, which is in the paradise of God.’ (Revelation 2:7)

Whoever keeps his mouth and his tongue keeps himself out of trouble. (Proverbs 21:23)

Let no corrupting talk come out of your mouths, but only such as is good for building up, as fits the occasion, that it may give grace to those who hear. (Ephesians 4:29)

Watch your words as they can shape your destiny

Watch your words for they become your destiny. Many people don’t realize how they shape their future by what they speak. For instance what you speak at an interview determines if you are selected for the job. By saying yes in your marriage service at church do you show your consent to marry and live with your beloved. People buy music not just for the sound of instruments but also for the words in the song lyrics.

Some people confess negative things for themselves and forget about it. Then after a few days tragedy strikes. I have dealt with such situations and found that there was a history of speaking in expectation of bad things to happen.

Remember that all the Israelites who murmured against God after he rescued them by taking them across the Red Sea. How they despised the goodness of the Lord though he provided for them in the wilderness. So as a result that generation of those who spoke against God’s plan of bringing them in the Promised Land never set foot into it. Their faithlessness and negativity led them into wandering for 40 years in the wilderness and living restless lives. It’s not days nor hours but forty long years. It was only the next generation of Israelites along with Joshua and Caleb who actually go to enter and inherit the Promised Land which is now called Israel.

While I also heard testimonies of those who were in grave danger but kept confessing that God will rescue them. As a result they survived when there was no chance to be saved.

The Holy Scripture mentions about a man who changed his life by his choice of words in prayer to God. He is called Jabez. Now, Jabez was named so because his mother gave birth to him in pain. By his confession of faith in God’s providence he obtained a wonderful heritage which was no longer marked with pain.

“Now Jabez was more honorable than his brothers, and his mother called his name Jabez, saying, ‘Because I bore him in pain.’ And Jabez called on the God of Israel saying, ‘Oh, that You would bless me indeed, and enlarge my territory, that Your hand would be with me, and that You would keep me from evil, that I may not cause pain.’ So God granted him what he requested” (1 Chronicles 4:9-10).

So what you speak can affect your life for better or for worse. Its not just your prayer which must have faith in Christ’s goodness, it’s even your daily speaking too.

When you see and hear about terror say that the hand of God is able to save you. When people say why study the Bible when there’s so much sin around you say that you want to read it because you want to know more about the sinless Lamb of God. When others say that the jobs don’t come easily so why go to business school then say that God works out good things to those who trust him.

1) There is that speaketh like the piercings of a sword: but the tongue of the wise is health. (Proverbs 12:18)

2) Death and life are in the power of the tongue: and they that love it shall eat the fruit thereof. (Proverbs 18:21)

Some children act insecure because their parents keep calling them useless almost every day. As their hearts are very receptive the kids internalize such labels without discerning. By the time they are teenagers they develop low self esteem. Parents should avoid discouraging their kids with rash words.

There are kids who are great achievers only because their parents spoke good to them. It’s not necessary to flatter kids but speak kindly yet firmly to them.

Avoid bad language as it’s not fitting for prince of heaven nor a princess of heaven. God has given you enough salvation and intellect to make your point politely.

If a person speaks blasphemy against Jesus he is danger of hell fire. But if he asks mercy from God for insulting Jesus then he will be forgiven and he is back on the road to heaven.

If you have spoken with wrong confessions about your future and are facing the consequences would you be idle about it? I mean it’s idle to swallow the cow and choke at the tail. You may even say that you never spoke any harm to yourself but remember others who did speak unseemly things about your future but what can you do. You may wonder ‘can deadly words from anyone against me be reversed?’

My answer is that what is impossible to man is possible with God. Because with God all things are possible.

Maybe you said things such as ‘my race/ethnicity prevents me from getting promoted’. You have changed companies but you didn’t get a promotion. Finally you get into a company which has only people of your race or ethnicity. But still success evades you.

Here you need to take a stand. You can choose to keep saying what limited you or you can speak life into your situation. Say something like ‘I’m a capable child of God. Christ will make me the head and not the tail. I pray that every success that has been evading me come to me. I cancel the grip of every evil word spoken by me or someone else. In the name of Jesus. Amen’

Whatever you say let it be consistent with the goodness of the Lord Jesus. When speaking a positive word or just praying make sure it is consistent with the teaching of the Bible especially the Gospel. Because the word of God brings life for those who believe in it. Speak wisely therefore and enjoy the life and goodness which comes from Jesus Christ.